In  Sweden we have an alcohol monopoly, where only the store called Systembolaget is allowed to sell alcohol. Stated at Systembolagets webpage, it exists for one reason: “To minimize alcohol-related problems by selling alcohol in a responsible way, without profit motive.” During Christmas this year, they have a campaign with a message on their plastic bags stated as follows: 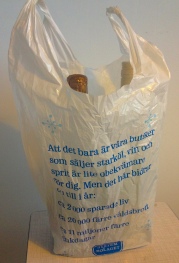 “ The fact that we are the only one that sells beer, wine and liquor is a bit uncomfortable for you. But this is what you contribute to this year:

Now… From a behavioural perspective, how does this make you feel? Perhaps I’m the only one, but this text actually puts me in a mood that make me feel – Yay, I just bought something for a good cause! Great, this justifies my alcohol shopping… Well, let’s be frank, I don’t think that’s the intention with the message.

Research led by Prof. Robert Cildini at Arizona State University proves that nudges can indeed backfire. In a national park, the research team tried to stop people from stealing petrified wood by posting: “Many past visitors have removed wood from the park, changing the state of the Petrified Forest”. But, with this warning, theft rates still stood high. So they changed the sign: “Your heritage is being vandalized every day by theft losses of petrified wood of 14 tons a year, mostly a small piece at a time”. Surprisingly, this warning influenced theft – but not in the intended direction: stealing jumped from 5 percent to almost 8 percent. The researchers concluded that the message people received was not “don’t steel the petrified wood” but rather “Stealing petrified wood is a common and socially acceptable behaviour.” This research proves that the intended effect the nudges can truly backfire. It emphasizes (as always) the importance of experimental testing thus, behavioural response to nudges can be unpredictable and very context depended.

I assume, that the intentions behind Systembolagets campaign are in line with the reason of why they exist, again: “To minimize alcohol-related problems by selling alcohol in a responsible way, without profit motive.” Maybe the campaign does work, we don’t know, as it’s most likely not tested.

But… According to me, from a behavioural perspective this is not a responsible campaign as it gives you a positive feedback holding a bag of alcohol. Hypothetically, this type of nudge may backfire making consumption of alcohol unintentionally justified as a good cause and consequently increase those numbers stated on the bag for next year… 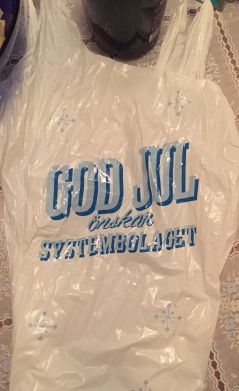 Critical debates about the nudge approach as a policy tool are often about that nudging “manipulates people’s choices“. That government tricks people to, in their unconsciousness, choose a certain choice. When it comes to this characterization of critique, Hansen and Jespersen (2013) highlights in a well written paper that there are often some unseen areas in the debate. Firstly, they argue that standard policy tools are seldom transparent. Hence, the critique about “manipulation of choice” applies not only for nudging – but for most types of policy instruments. E.g. who among us knows what taxes are applied to every product in the supermarket? So, perhaps a more accurate debate regarding this critique would be the question if paternalism is justified at all? And that’s another debate… Another valid point is that there are different types of nudges, some that may be more appropriate than others when it comes to policy implementation. Hansen and Jespersen divide nudges in to two types; type 1 and type 2. Both aim at influencing automatic behaviour*, but only type 2 is anchored in reflective behaviour*. Therefore, type 2 can be argued to change – not only people’s behaviour – but people’s choices, thus alleviate the manipulation of choice. The authors further divide these types in to two groups – transparent and non-transparent nudges. A transparent nudge is when the citizen being nudged, she or he reasonable understands the intention behind it. A Non-transparent nudge is working in a way that the citizen in situation cannot reconstruct the means by which the behavioural change is pursued. I have tried to clarify these types in the following table.

Still, this is a general categorization and the transparency can have different scales. For a more detailed description – I recommend you to read the paper. Thus, one comment that I would like to add to this paper is that people have different reactions to the nudge depending on their own internal context. A nudge can be subjective – transparent for one person while non-transparent for another hence may be hard to charegorize. But in general, I think this is a quite nice way of analysing central component for a more nuanced ethical framework for policy recommendation. Nevertheless, behavioural market failures notion that people are in fact sometimes bad choosers – making their (and other) lives go worse. Sunstein (2014) argues that it is legitimate and good reasons to use choice architecture to counteract behavioural market failures (i.e. justify paternalism) when behavioural market failures occur and are significant. Sunstein ventures a general principle; the first (and only) law of behaviourally informed regulation: In the face of behavioural market failures, nudges are usually the best response, at least when there is no harm to others. Expectations to this law is that a careful analysis of the social welfare consequences from the choice response. For example, laws that require people to buckle their seatbelts, or prohibit them from texting while driving are based on well-justified cost-benefit grounds and count as acceptable forms of paternalism. Hence, if justified by this law of behaviourally informed regulation, e.g. some types 1 and non-transparent nudges can be legitimate to use in policy. Conclusions we can draw from this discussion are that by maintaining transparency in the goals and methods of nudges, policy-makers can avoid the moral pitfall of paternalism. However, this does not preclude the mandate of using e.g. type 1 non-transparent nudges, but that it is important to careful evaluate and proper acknowledge the cost and benefits of the potential response from the nudge. * The dual process theory underpins the nudge approach and encompasses the concept of ‘system 1 and system 2 thinking’ (Kahneman, 2011). It emphasizes that the human brain functions in two ways that invites for a distinction between two kinds of thinking. ‘System 1’ is fast, intuitive and automatic, and ‘system 2’ is slow, rational and reflective. The two cognitive modes of thinking can be active in combination or in isolation. Thaler and Sunstein (2008) names them ‘automatic’ and ‘reflective’ system. References: Hansen, P. G., & Jespersen, A. M. (2013). Nudge and the Manipulation of Choice: A Framework for the Responsible Use of the Nudge Approach to Behaviour Change in Public Policy. Eur. J. Risk Reg., 3. Kahneman, D. (2011). Thinking, Fast and Slow. New York Sunstein, C. R. (2014). Why Nudge?: The Politics of Libertarian Paternalism. Yale University Press. Thaler, R. H., & Sunstein, C. R. (2008). Nudge: Improving Decisions About Health,Wealth, and Happiness. Yale University Press, Boston

Both those pro and against nudging as a tool for behaviour change often have a wrong idea about what nudging really entails. This is firstly because the concept is not easily definable. We’ve tried a bit in previous posts (see for instance this one or that one) to explain the concept but it remains a tricky concept. It is much easier to say what is not a nudge, than to define what is. Taxes, coercion and other means of force – those that take away freedom of choice – are not. Anything else might be a nudge, but not necessarily so. Hence, a lot of conceptual confusion.

However, there may be another reason why not everyone can agree on what is – and what isn’t – a nudge. After all, there is the word nudge itself, and then there is the conceptual meaning that we – in accordance to the initial ideas of Thaler and Sunstein – assume that the word nudge means. However, the official dictionary meaning of nudge is(as far as Webster Merriam is concerned, that is):

1) to touch or push (someone or something) gently

3) to encourage (someone) to do something

Possibly, the word has old scandinavian origins, for those interested in etymology.

Who are we to take an age-old word from the dictionary and claim it to be only that which we say it is. We can’t, really! And so there really is no way for us to say that something is or isn’t a nudge in the more general sense of the word. Take for instance the Dutch website http://www.nudge.nl. A cool website and initiative (sadly only in Dutch right now) which is about sustainable development projects. Freely translated from their ‘about’ section, they: “By facilitating bottom-up initiatives, offer negotiation perspectives that are easily accessible for all. Activities are based on ecological, economical and social impacts, both large scale and small scale.”. It is a social enterprise but it has not anything to do per se with the nudges we are talking about here. Confusing, yet who are we to criticize? They have just as much right to use the name as we do. So if some critic states that something is a nudge, and that he/she despises it for cooercing him/her into a certain direction, the only thing we really can say is “No, that is not a Thaler-Sunstein-nudge!”. It might be a normal nudge, if the person really is experiencing a government official shoving him/her in the back.

But then, with all this conceptual confusion, isn’t it better to take on a different name? Maybe. Maybe not. The weakness of the word – that it is used for other things as well because it is an already existing word – is also its strength. The word symbolizes what nudges are about. We of the behavioural-economy-nudge do not literally want to push – gently – consumers towards the right electricity choice, healthy and eco-friendly products or what not. I for one do not plan to improve the world by shoving people around. The strength of the word nudging lies in its symbolic meaning of giving people a little … well… nudge … in the right direction. It is a figurative way of saying we encourage people to do this and that, without standing in their way to do things differently.

I for one opt for maintaining the terminology as it is now, although a lot can be done about making clear (both to ourselves as towards others) what our Thaler-Sunstein-Nudge really is. But I am just one of many. Anyone who has the most brilliant term, slogan, or whatnot for what we really want with our nudge, make yourself known. There is ample space below this article for your very welcome feedback!

Nudging (or as some seem to have dubbed it ‘Nudge Theory’) is booming and inevitably there are critics. We can hardly deny that there are downsides to some aspects of nudges, and that they are not appropriate in all situations or cases. Acknowledged, for certain. The point in such cases is not to discard nudging, but to find the situations in which it can and in what way it can be helpful.

In other words, we encourage people to adopt a critical stance to the initial phase of using nudges, anywhere, anytime, anyhow. Test and see if it works before diving head-first into the dark. Most critique that points towards this direction is very useful and completely valid but…